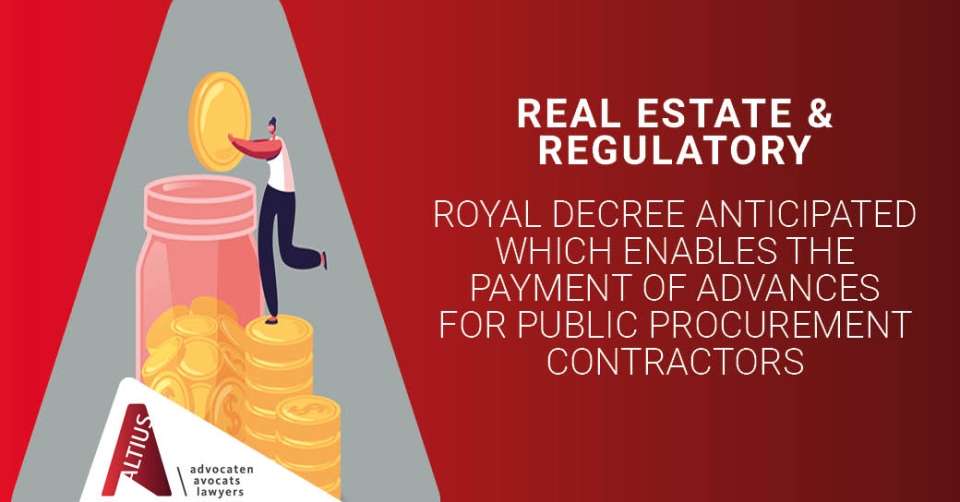 On 14 October 2022, the Council of Ministers approved a draft Royal Decree allowing advances to be granted to public procurement contractors to respond to the economic crisis resulting from the Ukraine war.

As per Article 67 of the Royal Decree of 14 January 2013 determining execution rules for public procurement contracting authorities can only pay advances in a limited number of cases. In addition, such advance payments must be provided for in the tender documents itself.

Due to – amongst other circumstances – the Ukraine war, the prices of many raw materials, semi-finished and finished products have increased significantly. These price increases are causing liquidity problems for many (public procurement) contractors, due to the fact that, in the absence of advance payments, they must prefinance these costs themselves.

Size of the advance

Contractors may receive an advance payment under the forthcoming Royal Decree which amounts to a maximum of 20% of the initial contract value. For contracts whose term exceeds 12 months, a reference amount is set, equal to twelve times the initial contract value, including taxes. This amount is divided by the duration of the contract expressed in months. For contracts of indefinite duration, the reference amount is determined by the monthly value of the contract multiplied by twelve.

It is not yet clear when the measures will take effect. The Council of Ministers submitted the draft to the Council of State for advice which might lead to modifications.

In addition, the Minister of Civil Service is charged with compiling a list of the sectors that were hit hardest and for which federal contracting authorities issue public contracts. On the basis of that list, federal ministers will have to examine the impact of the advances on their respective budgets. How the Belgian Regions will deal with this initiative remains to be seen. This is of importance, since the Regions are often involved in major infrastructure projects.

Also, it is unclear from the communication whether contractors are entitled to an advance payment or whether an advance payment is a mere favour granted by the relevant contracting authority. At this stage, no insights are known regarding the formalities to be completed to apply for and obtain advance payments.

Therefore, it cannot be ruled out that, depending on the sector and/or contracting authority, different arrangements may be worked out. This was similarly the case for the measures taken following the impact of COVID-19 on public procurement.

Your ALTIUS team will keep you informed and is available for questions.