Is AstraZeneca obliged to supply the EU with sufficient covid-19 vaccines?

Home » News » Is AstraZeneca obliged to supply the EU with sufficient covid-19 vaccines? 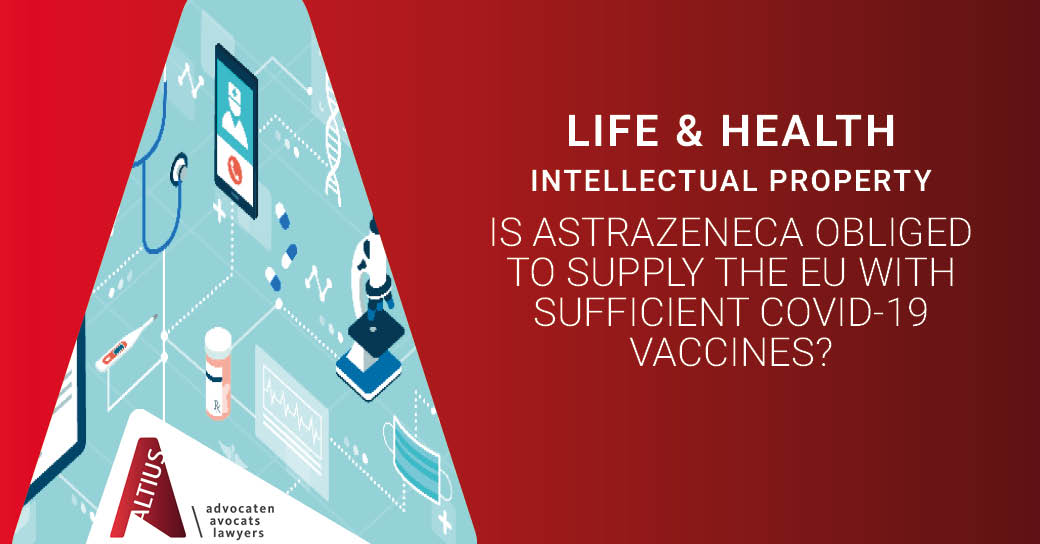 The EU-AstraZeneca agreement imposes a “best reasonable efforts” obligation on AstraZeneca to manufacture and deliver its Covid-19 vaccine doses to the EU. This obligation applies to AstraZeneca’s manufacturing sites not only in the EU, but also in the UK. Although the production issues of the Anglo-Swedish pharma company at its Belgian plant may not necessarily violate its “best reasonable efforts” obligation, it remains highly questionable whether AstraZeneca is allowed under the agreement to prioritise supply of the UK over the EU with its vaccines produced in the UK.

Indeed, the EU is neither a party, nor subject to the obligations under AstraZeneca’s agreements with the UK. AstraZeneca has expressly warranted towards the EU that it is not under any contractual obligation to third parties, such as the UK, which would conflict or be inconsistent with the complete fulfilment of its obligations towards the EU. AstraZeneca’s apparent intention of using the vaccines produced in the UK to fulfil the UK’s orders before supplying the EU could therefore be considered in violation of its agreement with the EU.

BACKGROUND OF THE DISPUTE

On 27 August 2020, the European Commission (‘Commission’), on behalf and in the name of the Member States of the European Union (‘EU’), entered into an advance purchase agreement (‘APA’) with AstraZeneca for the production, purchase and supply of AstraZeneca’s COVID-19 vaccine in the EU (see the Commission’s press release). The APA provides for AstraZeneca’s supply of 300 million doses of its COVID-19 vaccine (the ‘Initial Europe Doses’) and an option for the EU to order an additional 100 million doses (the ‘Optional Doses’). The redacted version of the APA, which has recently been officially disclosed, does not show the exact timing of the doses, although it has been stated in the media that at least 80 million doses were to be supplied in the first quarter of 2021.

In the last week of January 2021, however, AstraZeneca announced that it would cut back the supply of its COVID-19 vaccine to the EU in the first quarter to 31 million doses. AstraZeneca referred to a disruption at a production plant in Belgium, and added that it could not compensate this loss with the doses produced at its UK production sites, which it would first use to meet its obligations towards the UK. Following some back-and-forth, particularly regarding AstraZeneca’s obligations, both parties agreed to publish a redacted version of the APA and eventually also on the delivery of 9 million more Covid-19 vaccine doses bringing the total to 40 million doses (half of the initially foreseen 80 million doses).

The question therefore arises to what extent was and is AstraZeneca under a contractual obligation to supply the EU with the initially planned 80 million doses in Q1 2021, and what role its UK manufacturing sites should play in this regard? To answer this, we will examine the parties’ rights and obligations under Belgian law, which is the governing law for the APA (with the exclusive jurisdiction of the Brussels courts).

AstraZeneca’s manufacturing and supply of the Initial Europe Doses is subject to a “Best Reasonable Efforts” commitment.

The central provision in Section 5.1 of the APA in this regard provides that AstraZeneca “shall use its Best Reasonable Efforts to manufacture the Initial Europe Doses within the EU [which includes the UK in accordance with Section 5.4 on manufacturing sites] for distribution, and to deliver to the Distribution hubs following EU marketing authorization”, in accordance with a three-pronged delivery schedule (which has been redacted in the disclosed version but which apparently provides for the delivery of a first quantity in 2020, a second in Q1 of 2021 and a third at an undisclosed time).

This is also reflected in the APA’s preamble which states that AstraZeneca “has accelerated its manufacturing scale-up concurrently with its conduct of global clinical trials to ensure the broadest possible availability of the Vaccine, as quickly as possible” and that as part of this scale-up AstraZeneca “ has committed to use its Best Reasonable Efforts … to build capacity to manufacture 300 million Doses of the Vaccine … for distribution within the EU …”.

The concept of ‘best [reasonable] efforts’ originates from common law but has over the past decennia become very familiar also in the context of civil law systems, such as under Belgian law. In general, it means that the obligor must take all reasonable steps with diligence and ‘leave no stone unturned’ to achieve the agreed objective. Under the APA, the parties have defined this concept in section 1.9:

Whether AstraZeneca’s problems at the Belgian production plant would violate its ‘best reasonable efforts’ manufacture and delivery obligation is a question of fact. It would be up to the Commission to prove that AstraZeneca did not use its ‘best reasonable efforts’ to manufacture and supply the amount of doses stipulated for distribution within the EU.

Only if the Commission would be able to show that AstraZeneca did not undertake or use all activities and degree of effort that a company of similar size, infrastructure and resources would undertake or use, to scale up its manufacturing capacities at the Belgian production plant, would the Commission and the Member States have a ground to state that AstraZeneca did not comply with its ‘best reasonable efforts’ obligation.

ASTRAZENECA’S VACCINES PRODUCED IN THE UK?

However, in addition to what applies for the Belgian production plant, the parties expressly agreed that the UK’s manufacturing sites are also considered as “manufacturing sites located within the EU” used for the production and delivery of AstraZeneca’s vaccine doses to the EU. For that reason, AstraZeneca should in principle rely on these sites as well to meet its supply obligations under the APA. In other words, its best reasonable efforts obligation applies to all of AstraZeneca’s production plants in the EU and the UK.

For that reason, it is in our view doubtful that AstraZeneca could invoke the existence of competing obligations towards third countries (such as the UK) as a justification to supply the UK first and as a reason or justification to postpone the delivery of the agreed vaccine doses to the EU. This does not fall under a ‘best reasonable efforts’ defence and has apparently been excluded by the APA.

Under Section 13.1(e) of the APA, AstraZeneca indeed expressly represents, warrants and covenants vis-à-vis the EU that “it is not under any obligation, contractual or otherwise, to any Person or third party in respect of the Initial Europe Doses or that conflicts with or is inconsistent in any material respect with the terms of this Agreement or that would impede the complete fulfillment of its obligations under this Agreement”.

In the case where its best reasonable efforts supply obligation is jeopardised by production facilities at one of the European manufacturing sites, AstraZeneca can therefore not invoke the existence of contractual obligations towards the UK to refuse relying on other production facilities (such as in the UK) that are also covered by the APA to meet its best reasonable efforts supply obligation towards the EU.

PENALTIES OR TOOLS AT THE EU’S DISPOSAL

Although the parties, for all practical purposes and given the urgency of the matter, must find an amicable solution, it is worthwhile looking into the parties’ options in the absence of such a solution.

As for what concerns proceedings on the merits, the Commission could first of all seek the forced execution of AstraZeneca’s obligations. However, proceedings on the merits easily take up to one year or even more and one can only hope that the pandemic will be over by then. Alternatively, it could seek the resolution of the contract based on AZ’s material breach, including possibly the reimbursement of the funds already paid to AZ and compensation for any other damage resulting from AstraZeneca’s alleged breach of contract.

If the Commission would seek a short-term solution or would want to put pressure on AstraZeneca, then it could envisage to start PI proceedings, which are usually dealt with in a matter of weeks. Theoretically, the court could impose an obligation to supply vaccines, e.g. in accordance with the APA, under a financial penalty, e.g. per day of delay. This would be very hard if the basis would solely be AstraZeneca’s manufacturing issues in its Belgian production plant. Assessing whether AstraZeneca has thereby breached its ‘best reasonable efforts’ obligation would not only risk exceeding the boundaries of a prima facie assessment, imposing an obligation to supply vaccines is also difficult if the other party is in fact unable to produce these vaccines. A clear-cut violation by AstraZeneca of its obligations, e.g. by prioritising its supply obligations to the UK over its obligations to the EU, would be required.