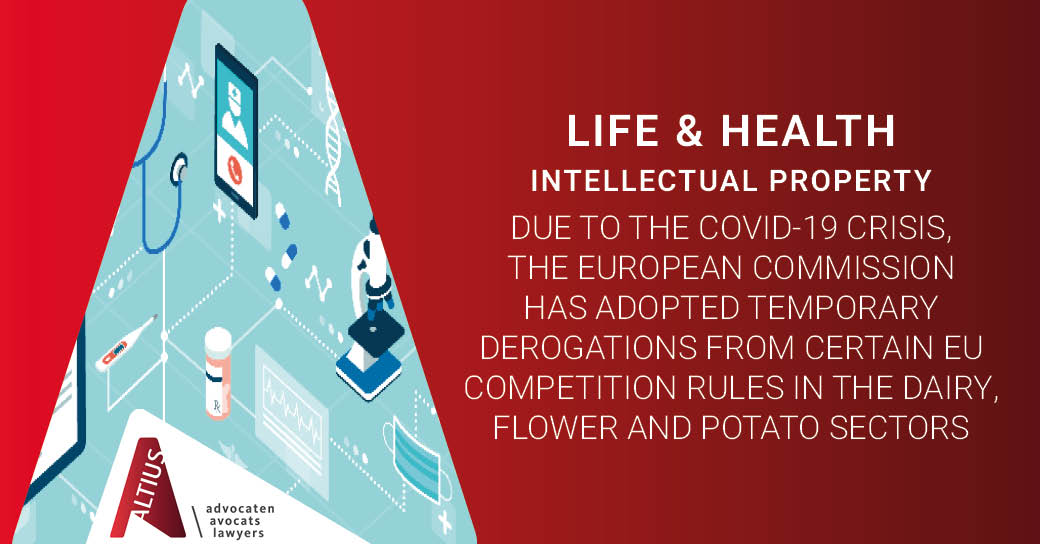 Article 222 of EU Regulation n°1308/2013, which establishes a common organisation of the markets in agricultural products, gives the European Commission the power to adopt temporary derogations from the cartel ban provided for in Article 101(1) TFEU during periods of severe market imbalances. To further support the agricultural sectors that have been most affected by the Covid-19 crisis, the European Commission has now done so for the dairy, potato and live plants and flowers sectors. These derogations allow a broad range of operators in the concerned markets to self-organise and implement market measures to stabilise the sector for a maximum period of 6 months.

Overview of the temporary derogations

On 30 April 2020, the European Commission adopted three implementing regulations allowing temporary derogations from the strict cartel prohibition provided for by EU competition law in three specific agricultural sectors: dairy, potato and live plants and flowers. The latter sector is said to broadly cover “live trees and other plants, bulbs, roots and the like, cut flowers and ornamental foliage”.

According to the European Commission, these sectors have been particularly hard hit by the Covid-19 crisis and are without any doubt facing a period of serious market imbalance.

The six-month period started for the dairy sector on 1 April 2020, and for the other two sectors on 5 May 2020. An extension of another six months is possible. The authorisations provided for in the Regulations cover the whole EU territory.

The legal basis for the adoption of these regulations is article 222 of Regulation n°1308/2013, which establishes a common organisation of the markets in agricultural products. This article allows temporary derogations on the prohibition of anticompetitive agreements provided that:

The Commission has specified that this means that it will not be possible to conclude agreements that directly or indirectly lead to partitioning markets, to discrimination based on nationality or to fixing prices. Such agreements or decisions will continue to fall under the prohibition of Article 101(1) TFEU.

As it is up to the Member States to assess whether the conditions above are fulfilled, there is an obligation to communicate the agreements or decisions to the competent authorities of the Member State (including its competition authority) that has the highest share of estimated production volume of the concerned products covered by those agreements or decisions, and to indicate the estimated production volume covered and the expected time period of implementation.

Another obligation is to communicate, no later than 25 days after the six-month period, the actual production volume.

The Member States, in turn, are required, in accordance with Implementing Regulation (EU) 2017/1185, to notify to the European Commission:

Exceptional times clearly call for exceptional measures. After all, the Commission’s power to allow such derogations has only been used once in the past and in a much more limited way. In April 2016, the Commission authorised agreements and decisions on the temporary planning of production in the milk sector. The entities covered by the implementing regulations n°2016/558 and n°2016/559 were recognised producer organisations, their associations and recognised interbranch organisations or cooperatives and other forms of producer organisations that had been established by milk producers. Individual farmers and non-recognised farmers’ associations were not covered and therefore it is likely that the current derogations will be used to a much greater extent.

Finally, it should also be noted that these measures follow the European Commission’s earlier announced wide-ranging support measures for the agri-food sector, such as flexibility in the use of financial instruments, reallocation of funds, extension of deadlines for CAP payment applications, higher advances of payments, etc.