CJEU clarifies when reverse payment patent settlements can be anticompetitive 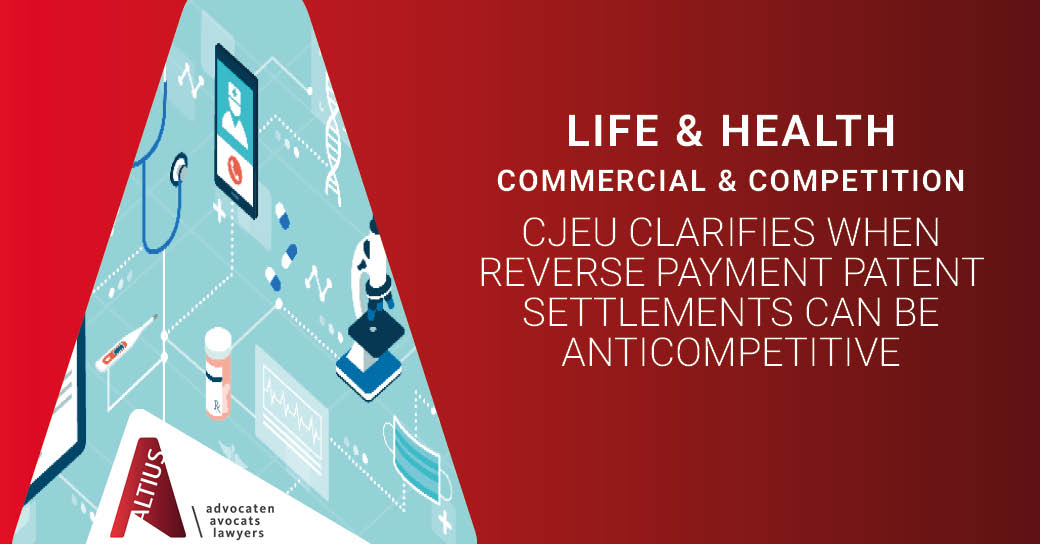 In its ruling of 30 January 2020, the Court of Justice of the European Union (‘CJEU’) has clarified for the first time the criteria governing whether a reverse payment settlement agreement concerning a dispute between the holder of a pharmaceutical patent (‘originator’) and a manufacturer of generic medicines (‘generic’) is contrary to EU competition law.

In particular, the Court has provided further guidance on whether and when: (i) originators and generics should be considered as ‘potential competitors’, (ii) a patent settlement between an originator and any generic(s) could be a restriction of competition ‘by object’, and, if not, (iii) ‘by effect’, (iv) generic products are to be considered as part of the relevant product market, and (v) such patent settlement agreements could be an abuse of dominance. The ruling confirms once again that reverse payment settlement agreements risk being contrary to EU competition law.

Background of the case

The case has concerned the prescription-only anti-depressant medicine paroxetine, marketed in the UK as Seroxat® by GSK. Pending court proceedings between GSK and certain generics regarding a GSK patent for a process of producing a form of paroxetine, the parties concluded reverse payment patent settlement agreements. Under those agreements, the generics committed to refraining from entering the market with their own generic medicines for the term of the agreement, and in return GSK made payments to the generics and allowed the generics to distribute paroxetine produced by GSK.

On 12 February 2016, the UK’s Competition and Markets Authority issued a decision finding that those settlement agreements were a restriction of competition by GSK and the generics, and also constituted an abuse of dominance on the part of GSK. Following an appeal, the Competition Appeal Tribunal handed down its judgment on 8 March 2018 and, by order of 17 March 2018, requested a preliminary ruling from the CJEU for further guidance on the questions and aspects set out in the introduction above and discussed in further detail below.

Originators and generics as potential competitors

The CJEU has first reminded that for horizontal cooperation agreements to be subject to the prohibition of Article 101(1) TFEU (the prohibition on anticompetitive restrictive agreements), the coordination must involve competitors or potential competitors. According to the CJEU, generics who are not yet present in a market are potential competitors of originators if there is the real and concrete likelihood that such a generic could join that market and compete with undertakings already present in that market. That is the case if two conditions are met:

1. The generic has a firm intention and inherent ability of entering the market of a medicine containing an active ingredient that is in the public domain (even when there are process patents held by the originator company). This is seen when the generic has taken sufficient preparatory steps to enable entering the market within such a period of time as would impose competitive pressure on the originator. Those steps could include measures for obtaining the required marketing authorisations, the building-up of sufficient stock, taking the legal steps to challenge the process patents held by the originator company etc.

That firm intention and inherent ability to enter the market can also be confirmed by additional indications, like the originator’s intention to make transfers of value to a generic company in exchange for the postponement of the latter’s market entry, even though the former claims that the latter is infringing one or more of its process patents. The greater the transfer of value, the stronger the indication.

2. The market entry of such a generic company does not meet insurmountable barriers to entry. The existence of a patent that protects the manufacturing process of an active ingredient that is in the public domain cannot, as such, be regarded as an insurmountable barrier. This position is not affected by (i) the presumption of validity of a process patent held by the originator, (ii) the uncertain outcome of the validity dispute of that patent, and (iii) the existence of injunctions granted by a national court in which the generic companies are on an interim basis prohibited from selling the generic medicines.

If these conditions are met, then an originator and a generic, which are not yet present in the market of the medicine at issue, can be considered as potential competitors.

The CJEU further had to assess whether pay-for-delay settlement agreements constitute agreements that have as their object the prevention, restriction or distortion of competition. The qualification of agreements as ‘restrictive by object’ means that they are, by their very nature, considered as harmful to competition, as a result of which it is not necessary to assess their effects.

According to the CJEU, a patent settlement could constitute such a restriction of competition by object when it can be regarded as an agreement bringing to an end entirely fictitious disputes, which it found was not the case here. The fact that a patent settlement involves transfers of value, whether pecuniary or non-pecuniary, is in itself not sufficient ground to classify it as a restriction by object, since those transfers of value may be justified.

However, a patent settlement is restrictive by object when the transfers of value provided for by the settlement agreement cannot have any explanation other than both parties’ commercial interest not to engage in competition on the merits. For that analysis, it should be assessed whether (i) there is a ‘net gain’ for the generic company taking into consideration all the transfers of value made between the originator and the generic, (ii) there are proven and legitimate justifications for that net gain, and (iii) the net gain is sufficiently large to convince the generic.

Pro-competitive effects must also be taken into consideration in assessing whether such an agreement constitutes a restriction by object, provided that they are demonstrated, relevant, specifically related to the agreement and sufficiently significant. In the case at hand, the CJEU hinted that alleged pro-competitive effects (the slight price reduction resulting from limited volumes supplied by GSK to the generic companies), were not only minimal but probably uncertain.

Restriction by effect does not presuppose an assessment of the likelihood of success in patent invalidity proceedings, or the probability of less restrictive settlement agreements

If the referring Court would decide that the patent settlements do not constitute a restriction by object, it should assess whether these settlements restrict competition by their effects. To establish the existence of appreciable potential or real effects on competition, the CJEU stated that no determination is required that the generic would probably have been successful in the patent proceedings, or that the parties to that agreement would probably have concluded a less restrictive settlement agreement. These are only some factors among many that arise under counterfactual analysis to determine how the market would probably operate and be structured if the agreement were not concluded. In any event, the restrictive effects must be sufficiently appreciable.

Market definition: generic products are relevant when the generics are in a position to enter the market with sufficient strength to constitute a serious counterbalance to the originator

For the product market, the CJEU referred to the general principle of a sufficient degree of interchangeability between the originator and generic medicines. The CJEU first clarified that the interchangeability of products is naturally dynamic. A new supply of products (e.g. generic medicines containing the same active ingredient) could alter the conception of the products considered interchangeable with a product and could justify a new definition of the parameters of the relevant market (e.g. exclusively medicines containing that active ingredient).

Then turning to the question of when there is a sufficient degree of interchangeability between the originator and generic medicines, the CJEU stated that the generic manufacturers should be in a position to enter the market within a short period with sufficient strength to constitute a serious counterbalance to the originator. This is the case where, in the case of an active ingredient in the public domain, those generic companies have formed an effective strategy for market entry, taken the necessary steps to enter the market (e.g. MA application), or concluded supply contracts with third-party distributors.

On the abuse of such a dominant position, the CJEU held that a contract-oriented strategy of an originator holding a dominant position in a market may be penalised not only under Article 101 TFEU by reason of each agreement taken individually (restrictive agreements) but also under Article 102 TFEU (abuse of dominance) for the possible additional damage that strategy might cause to the competitive structure of a market. This requires that that strategy has the capacity to restrict competition and, in particular, to have exclusionary effects going beyond the specific anticompetitive effects of each of the settlement agreements individually.

On the eve of Brexit, the CJEU has seized the opportunity of a preliminary ruling reference to determine the criteria governing whether and when a settlement agreement concerning a dispute between an originator and generic(s) is contrary to EU competition law. The judgment confirms once again that reverse payment settlement agreements risk contravening EU competition law. When entering into such agreements to overcome the inherent uncertainties of patent proceedings, originators and generics should ensure compliance with the CJEU ruling.

Given the facts underlying the case and the CJEU’s reference to medicines containing an active ingredient that is in the public domain and (a) process patent(s) held by the originator, lack of clarity still exists about whether the CJEU’s judgment also applies to reverse payment settlement agreements relating to product patents.