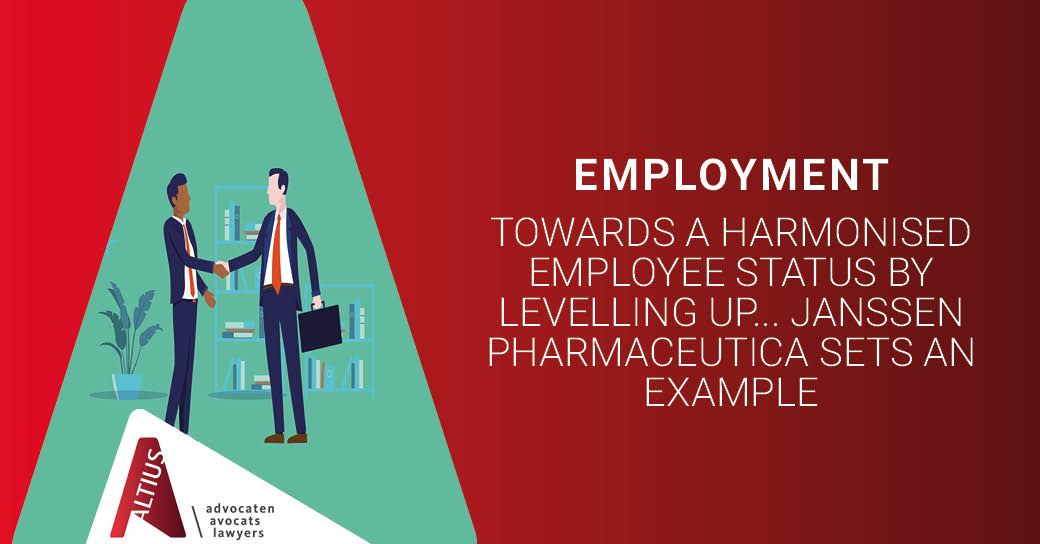 In the life-sciences industry, many companies still make a distinction between the blue-collar and white-collar members of their workforce, often with significant differences in the applicable employment terms and conditions. Very recently, a major player in the pharmaceutical sector, Janssen Pharmaceutica, has entered into a company CBA with the social partners that provides for full harmonisation between its blue-collar and white-collar employees, by abolishing the blue-collar worker status for all its workers from 1 October 2019. It remains to be seen how the sector will react and whether other pharma companies will follow.

Towards a harmonised status… the end is not near yet…

It could be expected that the legislator would take the opportunity to work out a fully unified and harmonised status and abolish all the differences. Unfortunately, the legislator opted for a minimalist approach by only harmonising the notice periods and by abolishing the carenz-day, resulting in the Single Status Act of 26 December 2013, which came into force on 1 January 2014.

The different status between blue-collar workers and white-collar employees is perceived as being outdated and no longer justified; this is a result of the changing employment market in which the tasks, functions and responsibilities of blue-collar workers and white-collar employees have become more and more aligned as they are all are part and integrated within the same production process(es).

Due to the lack of legal initiatives, the private sector seems to be taking this matter into its own hands.

Is Janssen Pharmaceutica setting a trend towards more company initiatives?

Last Friday (13 September 2019), it was announced in the media that Janssen Pharmaceutica and the social partners had concluded a company CBA abolishing the blue-collar worker status from 1 October 2019. From that date, all blue-collar workers will switch to a (more beneficial) white-collar employee status. The complex practical aspects of this arrangement are set out in a company CBA. Amongst other things, going forward, former blue collar workers will receive a gross monthly salary as opposed to a gross hourly salary and will become entitled to vacation pay according to the white-collar employee calculation method.

By concluding this CBA, Janssen Pharmaceutica and the social partners have worked out for themselves a “solution” to the difference between blue-collar workers and white-collar employees. Based on the available information, it seems that the parties have opted for a levelling-up approach in which the employment terms and conditions of the blue-collar workers will become aligned with those of the white-collar employees, to the extent more favorable.

By taking this action, Janssen Pharmaceutica is setting a trend and, while awaiting new legislation, it can be expected that the trade unions will lobby for similar levelling-up harmonisation CBAs in the sector.

If your company is considering entering into a company harmonisation CBA as well, then please pay attention to the following pitfalls:

Although the signatory parties to a company harmonisation CBA can contractually agree that the blue-collar workforce will be considered as white-collar employees from a certain date, the question arises to what extent such provision is enforceable and binding vis-à-vis the individual employees, labour courts and       other third parties, such as the social security administration or the vacation fund.

It might be that the modalities of such harmonisation CBA will not fit within a future legislative framework. A duly drafted CBA should anticipate such developments by providing for the necessary flexibility.

It remains to be seen whether other companies in the sector will follow Janssen Pharmaceutica’s initiative, and, in the affirmative, whether they will also opt for a similar “levelling-up approach”. In any event, when entering into a company CBA, it is of the utmost importance that such a CBA is duly drafted to protect the company’s interests.