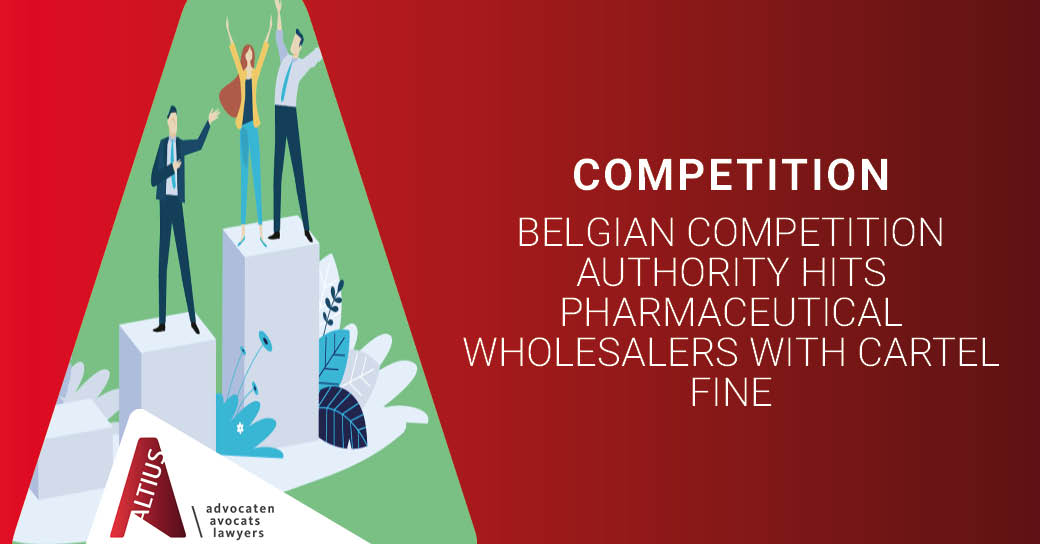 Belgian companies active in the pharmaceutical sector at different levels should beware of competition law. The Belgian Competition Authority (“BCA”) has placed the sector high on its agenda, and is now acting in line with those priorities. On 18 February 2022, the BCA’s Prosecution Service punished two pharmaceutical wholesalers for participating in a cartel, and imposed fines of 29.8 million EUR. Pharmaceutical laboratories and pharmacies that have been a victim of these cartel agreements can now use this decision to claim damages in court.

In a settlement decision of 18 February 2022, the BCA’s Prosecution Service has held that two pharmaceutical wholesalers, Febelco CV and Pharma Belgium-Belmedis SA, were involved for more than 13 years in two different cartel infringements. One cartel related to so-called “transfer orders”, the other to influenza vaccines.

In its decision of 18 February 2022, the BCA’s Prosecution Service has found that some pharmaceutical wholesalers, including Febelco and Pharma Belgium-Belmedis, agreed to apply the same commercial conditions towards the pharmaceutical laboratories for the distribution of pharmaceutical products via the transfer orders system. In particular, the wholesalers agreed to apply the same pricing for their services to pharmaceutical laboratories and to offer services with identical content. Such agreements to fix the prices and the content of commercial services amongst competitors infringe Article IV.1 of the Belgian Code of Economic Law and Article 101 of the Treaty on the Function of the European Union. According to the BCA, the agreements lasted for at least 13 years, from 2003 till 2016.

The BCA’s Prosecution Service has also found that between 2003 and 2016 Febelco and Pharma Belgium-Belmedis fixed prices for influenza vaccines. Each year, pharmacists can pre-order a certain quantity of the new influenza vaccine during a specific period (the “pre-sales period”) before they are put on the market. According to the BCA, certain pharmaceutical wholesalers, including Febelco and Pharma Belgium-Belmedis, agreed to apply the same commercial conditions for influenza vaccine sales to pharmacists during the pre-sales periods. In particular, the companies agreed not to grant discounts to pharmacists and not to accept returns of unsold vaccines ordered during the presale period. They equally agreed on the duration of the pre-sales period. Again, such agreements about prices and commercial conditions amongst competitors are a hardcore cartel infringement, both under Belgian and European competition law.

The BCA started an investigation into these practices following Febelco’s leniency application, which revealed the existence of these infringements. By being the first to confess to its involvement in the cartel agreements, Febelco received immunity and thus escaped a cartel fine. Pharma Belgium-Belmedis also applied for leniency, but it has only received a 40% reduction in fines – the second leniency applicant can only receive a reduction between 30% and 50%. The BCA has therefore imposed a fine on Pharma Belgium-Belmedis of 26,780,401 EUR for the transfer orders infringement, and  3,016,792 EUR for the influenza vaccines infringement, making a total of 29,797,193 EUR.

That fine amount also takes into account a 10% reduction as a “transaction discount”. Both Febelco and Pharma Belgium-Belmedis agreed to enter into a transaction, i.e. a settlement, with the BCA. In the context of such a transaction procedure, the Prosecution Service reduces the fines to be imposed on the companies in return for the companies’ acknowledgement of their participation in the infringements and their resulting responsibility. The fine is then imposed in a decision made by the BCA’s Prosecution Service, without proceedings before the Competition College. Importantly, unlike settlement decisions imposed by the European Commission, BCA settlement decisions are final and thus cannot be appealed.

Interestingly in this case, a third company that was also subject to the BCA’s investigations into these cartel agreements, CERP SA (the Belgian subsidiary of Astera), decided not to enter into the Prosecution Service’s proposed settlement. While the BCA case is thus closed regarding Febelco and Pharma Belgium-Belmedis, the BCA’s procedure against CERP continues. Therefore this is the BCA’s first hybrid settlement case.

Given the cartel agreements’ long duration of 13 years and the involved companies’ importance in the pharmaceutical wholesaler market, many pharmaceutical laboratories and pharmacists are likely to have suffered significant damages due to these competition law infringements. In recent years, the European Union has incentivised private damages claims by cartel infringement victims through the stimulation of the introduction of new rules facilitating such damages claims. Therefore, Belgian legislation provides that final BCA decisions, like the BCA’s final settlement decision of 18 February 2022, will serve as an irrebuttable presumption of the competition law infringement made by the cartelists, Febelco and Pharma Belgium-Belmedis, and the cartel infringements are also (rebuttably) presumed to have caused damages.

Importantly, not only victims of Pharma Belgium-Belmedis, but also victims of the immunity applicant, Febelco, can claim damages. The BCA’s grant of immunity protects a company against the imposition of cartel fines, but does not generally shield it from damages claims.

The BCA had noted in the past that the pharmaceutical sector is one of its main focus areas. In its priorities for 2021, it indicated that “the pharmaceutical sector remains a priority for the BCA, as is the case in other European countries. The Covid-crisis even stressed the major importance of this sector. The BCA will pay attention to all parts of the value chain: the prices set by the laboratories, competition between wholesalers-distributors, the competitive dynamics and innovation at the level of pharmacies.” The BCA is clearly determined to meet this stated priority. Accordingly, the BCA is dealing with several cases in the pharma sector, relating to restrictive practices and merger review. For example, an investigation into certain hospitals and pharmaceutical companies regarding restrictive practices to limit, delay or prevent market entry or expansion of biosimilar medicines competing with existing medicines is still ongoing. There are also several cases on abuse of dominance (excessive pricing) in the pharma sector currently pending before the BCA.

At ALTIUS, we have all the necessary expertise to assist you in any competition law matter in the pharmaceutical sector. Our experienced Life & Health lawyers combine specialised knowledge in competition law, litigation, pharma law and the pharma sector to determine the opportunities, strengths and weaknesses in your case. Regarding competition law, we have particular experience in damages claims and are also very well-placed to advise on any potential damages claims relating to the BCA’s decision of 18 February 2022.