From toys to business tools: is the regulatory framework for drones ready for this development?

Home » News » From toys to business tools: is the regulatory framework for drones ready for this development? 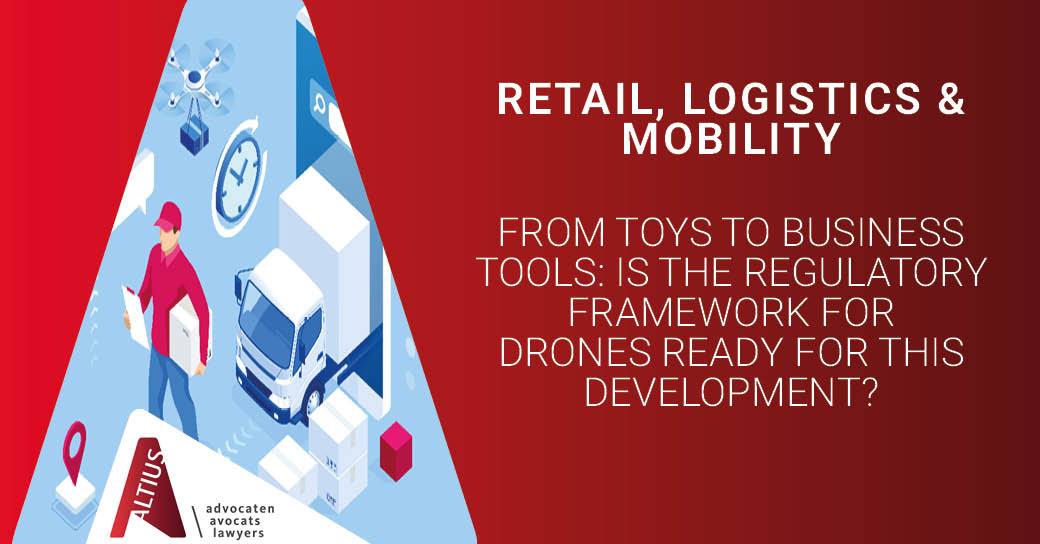 “Ordered before midnight, tomorrow delivered at your home”. Lightning-fast parcel delivery is one of the greatest advantages of living in the early 21st century. Companies are now literally ‘racing against the clock’ and fighting with their competitors to make the time gap between a clients’ order and delivery to the home or workplace as short as possible. On the downside, however, we are also beginning to see our roads becoming even busier and more unsafe, which raises environmental, efficiency and safety questions. Therefore, the time has arrived for companies to explore new transport means. One solution might lie in supplying customers through the skies by using drones.

Belgium prohibits the transport of goods by drones (for now)

Belgium currently regulates the use of drones through the Royal Decree of 16 April 2016 on unmanned aircrafts. This legislation, which does not apply to the recreational use of drones, sets out drone operators’ obligations based on the type or category of drone and the degree of risk associated in flying that specific drone.

While the Royal Decree of 16 April 2016 achieves a detailed framework both regarding the categorisation of drones and the accompanying liability aspects, it contains a major setback for companies wanting to use drones for the delivery of their goods to customers as it explicitly prohibits the transportation of goods (art. 6).

European initiatives to override national legislation in the near future

The Belgian prohibition on the use of drones may soon be part of the past as European legislation is on its way. After an extensive process involving impact assessments, stakeholder consultations and public consultations, the European Commission has adopted a Draft Regulation on the rules and procedures for the operation of unmanned aircraft.

This Draft Regulation’s main goal is to both harmonise and simplify:

1. The “open” category: applies when the operation of the drone involves a low risk. Such a drone must remain visible for the operator and may transport materials if the purpose is of an agricultural, horticultural or forestry nature.

2. The “specific” category: refers to a moderate risk and requires the authorisation of the national authority competent for flight operations.

3. The “certified” category: applies when the operation of the drone involves a high risk. This category of drones is allowed to provide international cargo transport and even to transport human beings.

The Commission’s Draft Regulation may still develop but today it appears that parcel delivery will fall under the “specific” category and thus require the authorisation of the competent national authority (which in Belgium is the Directorate General Air Transport of the Federal Service Mobility and Transport).

The drone sector has enormous potential. The European Commission predicts that by 2035 the European drone sector will (i) provide more than 100,000 direct jobs, and (ii) have an economic impact of more than € 10 billion per year, mainly in services.

Today, the biggest barrier to the development of the drones for commercial purposes is regulation and this is mainly for safety and privacy reasons. The European legislative bodies must make this an absolute priority before others, such as China and USA, move far ahead, which would lead to an increased gap in business areas such as e-commerce and transportation. The European Commission seems to be aware of the urgency and recently adopted new rules regarding technical requirements for the design and production of drones. To be continued…